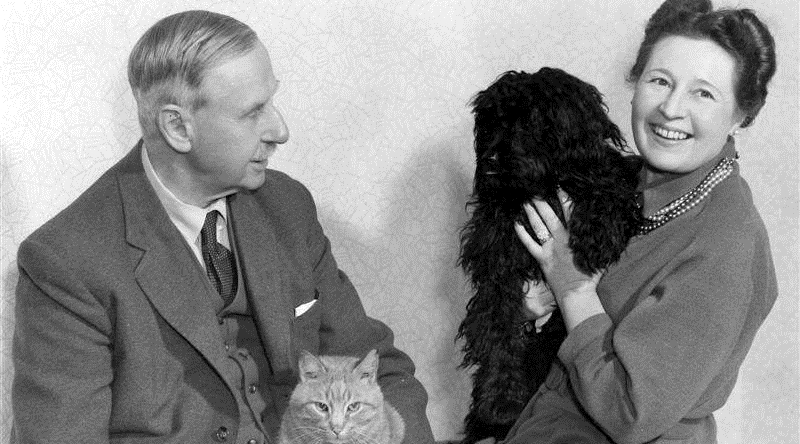 Muriel Dowding, Baroness Dowding (22 March 1908 – 20 November 1993) was an English animal rights activist and vegetarian. She was born in London on 22nd March 1998 and her family name was Muriel Albino. In 1935 she married Maxwell Whiting with whom she had a son. Widowed during the Second World War, when her first husband died on a bombing mission, she married in 1951 Air Chief Marshal Lord Dowding, victor of the Battle of Britain. Hugh Dowding eagerly joined Muriel in her struggle to help animals until his death in 1970. She died in Hove, East Sussex on 21st November 1993.

She was well known in Britain for her work for animal rights. Dowding used her prominent social position to advance animal welfare without seeking any personal gain or reward. She hosted regular Sunday lunch parties introducing influential people to vegetarian food, and her house was always a sanctuary for animals in need. She was vice-president of the Royal Society for the Prevention of Cruelty to Animals and president of the National Anti-Vivisection Society; she also had appointments in smaller animal welfare societies, where she fulfilled her role with undimmed enthusiasm.

Dowding was also aware of the cruelty involved in the production of fur coats and fur accessories, which were fashionable at the time. She helped organise fashion shows around Britain to introduce stylish simulated furs and offer leaders in society and the fashion world humane alternatives in cosmetics. Thus Dowding began a national campaign to change the industry.

In 1959 she founded Beauty Without Cruelty (BWC) to highlight the suffering of animals in the cosmetics industry. The company was initially founded as a charity and in 1963 it became a private company. BWC’s goal was to create natural cosmetics that did not contain animal ingredients and had never been tested on animals. Katherine Long, a well known cosmetician and animal welfare activist, worked with Noel Gabriel to lead the organization in creating these products. Muriel Dowding offered her assistance to the organization after Long’s death in 1969 to stop it from being shut down.  Later in 1978, Joseph Piccioni became the managing director of BWC in Great Britain. With his business expertise and dedication to animal rights, Piccioni helped lead BWC to launch its lines in the United States in 1989.

Dowding’s ability to inspire was considerable. But she was never one to sit back and allow others to do the donkey work. The activity was continuous and mini-buses regularly took off for all parts of Britain, with Dowding riding with her helpers and wholeheartedly helping with the packing and unpacking as well as addressing audiences. Her work for animal rights is remarkable and has contributed to the improvement of animal welfare.